Can a Felon Become a Lawyer

Many times, felons take an active interest in the legal details of their case, and even find the study of law to be quite interesting. Some inmates, in fact, become so enamored with the subject matter that they take classes during their prison term.

Reasons for this may vary. Perhaps they want to better understand their own case in order to obtain an early release, or maybe they have a goal of potentially going into a legal practice upon their release. Yes, that’s right; some felons want to study law so they can practice it themselves when they get out! But is this even possible? Can a felon become a lawyer?

Yes, A Felon Can (Sometimes) Become a Lawyer

Long story short, we have to consider the state within which the would-be attorney is planning to apply. Most, but not all, states will allow a felon to apply for admission to a state bar. In other words, yes, usually a felon can apply for to get a license to practice law, however one should absolutely plan on the application to be thoroughly scrutinized. It’ll be a hard road to travel, but it is (usually) possible.

Check This Out! Reginald Dwayne Betts is living proof that felons can become lawyers.

Can a Felon Become a Lawyer? Answered

Attorneys are expected to possess a certain high level of honesty and integrity, and the bar is going to screen for indicators of these qualities…or lack thereof. Every bar is different, so criteria are somewhat subjective and difficult to know in advance (by the way, for the sake of clarity, let’s define ‘bar’ or ‘bar association,’ as ‘a professional body of lawyers…responsible for the regulation of the legal profession in their jurisdiction.’ Admission to the bar in the United States is strictly regulated for obvious reasons.

Meanwhile, some states refuse to consider applications from felons, period. Those States are as follows:

Also a portion of the Marianas Islands, though these are technically a territory, not a state. Other states may have quite strict criteria, but don’t maintain an outright ban on felons becoming lawyers…but they can be super selective!

Here are a few great resources for felons trying to become a lawyer.

Once you have determined your pre-eligibility, if it looks likes you are in the clear then it is time to begin the next phase…the actual application process! You must begin by deciding which law school you wish to attend. You can find a ranked list here of the best law schools.

In most, but not all cases, you’ll first need a bachelor’s degree prior to attending law school. Though it isn’t necessary to have any specific major for your bachelor’s degree, it obviously never hurts if you’ve taken some foundation courses in the area of law. But again, it doesn’t really matter, because you’ll learn everything you need at law school anyhow. Here is some great information about pre-law majors.

Many felons complete undergraduate degrees while serving their terms, however upon release they may find it difficult to finance attending law school. The average annual cost of law school is between $17,000 to $43,000! So not to venture too far off topic, but keep in mind there are ways to obtain financial aid for felons to cover the expensive costs of furthering their education like Pell grants. Certain restrictions do apply on felons seeking federal grants, though.

Ensure the school of your choosing maintains the proper accreditation by the American Bar Association. (Okay, we should mention, not all states actually require attendance of law school in order to take the bar exam; however, law school is the standard, recommended route, and it’ll open a lot more doors for you. But technically, it isn’t needed in all states). With the advent of online schools, it is always unfortunately possible to run into some disreputable distance education colleges that do not carry the proper accreditation. So do your homework, read the reviews of each school, and determine beyond a doubt that they have the credentials. Otherwise you run the risk of spending years obtaining a completely worthless diploma!

During your application to a reputable law school, expect a routine background and credit check to be done, and as always, never try to hide or misrepresent your felony past. Doing so can only come back to haunt you later, and end your chances of ever becoming an attorney.

As you apply, ensure you are completely forthcoming with your criminal past history. Not only do various states have differing criteria, but the schools do, as well. Yes, that’s right; there’s nothing which forces a school to accept an applicant. They can turn you down for a variety of reasons including being a felon, apart from sheer academic standards.

Also an odd fact to keep in mind…it may seem ironic, but a law school could allow you to attend within a state which will not allow you to practice!

Looking to the future, once law school is over and a ‘juris doctor degree/ JD degree’ is earned, the applicant would then ask the state bar association for acceptance. So it goes without saying, you’ll want to ask the state that you actually plan to practice in. This is where your character and fitness questions and answers will be reviewed, along with all the details of your criminal background. Just because you got the degree doesn’t mean they have to accept you to the next round of the process.

Again, be completely honest, and understand that any dishonesty could lead to an automatic dismissal of your application. Meanwhile, naturally, if you have received a pardon or if you have undergone rehabilitation efforts, make sure this is known to the bar as they consider you. It is your job to show them you are a worthy candidate; don’t make them dig for clues. You’ve got to take an active role in selling yourself. 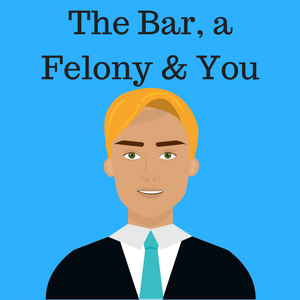 The bar association will consider the following facts:

Indeed, a serious applicant will be working on this area well in advance of this stage. The more severe your crime, the harder and longer you’ll need to work to show you have changed and are not the same person anymore. Of course, if your record was expunged, ensure that is known, too. It is possible they will ask to see the sealed records, so you should reveal any details in the ‘criminal history’ or ‘other relevant information for the Committee’ area of the application forms. Don’t try to cover it up!

What Type of Law

One more consideration: what type of law do you wish to practice? There are all types of fields to consider, from bankruptcy, estate planning, personal injury, family law, corporate law, criminal law, immigration law, tax law, litigation law…the list goes on.

Certain areas of law may be harder to pursue for felons with certain convictions. For instance, you were convicted for fraud but want to practice financial law? Maybe not the best idea. But family law could be more open to you. Again, there’s a wide range of options, so if one door is closed, the others may be open for you.

If the board decides to let you proceed, you’ll take the bar exam. Otherwise, they could either reject your application outright or possibly ‘delay’ it pending further proof of your character. In other words, they’ll let you know you’ve basically not done a good enough job to convince them, but keep trying! It’s their way of saying ‘maybe.’

Some states require a five year waiting period from the time of the sentence ending. Other states may be prejudice against persons who are in financial need because it could indicate they might be open to accepting bribes, etc.

But one nearly universal criteria that all applicants must pass it the ability to show they have no ‘moral turpitude,’ or in other words any tendency to display ‘behavior that gravely violates the sentiment or accepted standard of the community,’ such as lying or cheating.

This might seem humorous to some, when we consider that lawyers are often portrayed as liars themselves, frankly. But the field of law is one of extreme technicality. A lawyer is not permitted to ever lie in court, but they must do their job to represent their client as best as they can, and in some cases this means getting that client off on a legal technicality. They cannot lie, but they also cannot come out and say to a jury that they believe their client is guilty, even if they believe that to be the case.

So a felon, as with any applicant, is held to a high moral standard during the screening process. A crime involving moral turpitude could mean a ‘do not pass GO.’ Each case is different, and as the ABA itself has stated, ‘The fact of a conviction, we have argued, is a matter to be taken into account,’ but, ‘A person’s conviction may be, but is not necessarily, related to the ability to engage in a particular trade or occupation.’ In other words, they will certainly look at the conviction itself to see how it may or not not affect the felon’s ability to perform the job appropriately.

If you are cleared to take the 2-3 day bar exam, register for the exam dates, study hard, and do your best to pass! It won’t be easy. Many testers opt to sign up for a two month long preparation course, which isn’t required, but can be very helpful if the person has the time and money.

The bar exam consists two parts: the 200 question Multistate Bar Examination, or the MBE, and the state specific part, meaning they want to see your understanding of state law. This is often done via essay.

There may also be a Multistate Performance Test, or the MPT, sort of a mock situation in which a lawyer applicant can be tested in a live simulation. Not all jurisdictions require this, though.

If you pass the exam, your next step is to request to be granted admission into your local state bar. Many law firms will hire an individual prior to their even taking the bar exam, however if you were not that lucky, then once you are granted admission, you are free to start job hunting!

We hope this article helped answer the question, can a felon become a lawyer? As always, please take this guide as a broad overview and continue to research the topic in-depthly. Becoming a lawyer is a dream of many, but it takes a long time and a ton of effort. Why do you think they make so much money? Starting salaries are around $160,000 a year, per the New York Times!

Felony Expungement – In a number of states it is possible to have your felony conviction either expunged or sealed. Imagine having your record swiped clean! Learn more here.

Loans and Grants For Felons

Check out our felon friendly loans and grants page. Learn where to get personal loans, student loans, grants and how your felony record may affect you going to college.

Learn where and how to find felon friendly housing options.