Can A Felon Go To A Shooting Range 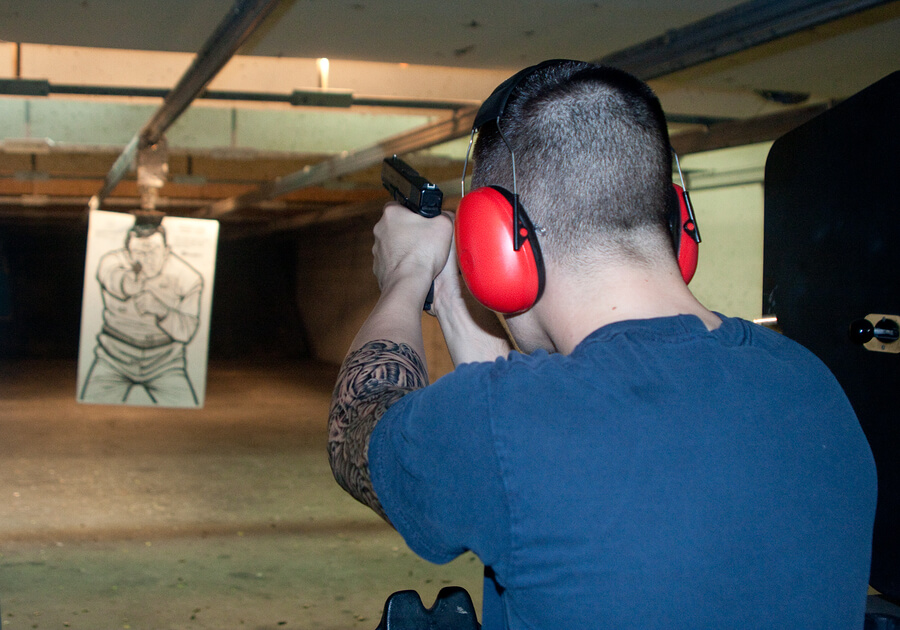 Can a Felon Go to a Shooting Range?

Short Answer: No, it is not a good idea for a felon to go to a shooting range for a number of legal reasons. There are a few exceptions though depending on the state and local municipality you are in. Black powder guns may also be an exception since federal law ignores these types of guns.

Recently we’ve done a few articles about felons and weapons ownership and usage. These article included “Can a felon own a bow” and “Can a felon own a crossbow.” So it seems like the perfect time to address a related question–can a felon go to a shooting range (or gun range, firing range, etc)?

Like most of us, felons have hobbies and deserve to be able to go out and “destress.” Firing off a few high-caliber rounds at the local indoor or outdoor range can be an excellent source of tension release, but as you can guess, a criminal history can severely restrict one’s ability to go out and do that. So let’s take a closer look at whether a felon can or can’t go to a shooting range…

Right off the bat we run into an issue with federal law. Federal law doesn’t allow a convicted criminal, who was “convicted in any court of a crime punishable by imprisonment for a term exceeding one year” to have a firearm…or ammunition even, for that matter. Obviously it would thus be a punishable offense for a felon to possess or own a gun, and by punishable we mean you are looking at at 10 year prison sentence! You can thank to 1968 Gun Control Act for that.

Certainly there are exceptions, one being if a convict has had their rights restored through legal process like felony expungement… a traumatically difficult experience for some, but it is within the realm of the possible. So if that’s happened, and rights to possess a firearm have been restored, then naturally those individuals are excluded from prosecution if they own a gun. Therefore there should be no issue with going to a shooting range for such lucky folks.

Or, in a similar vein,  if they’ve been pardoned, then they, too, should be in the clear as far as firearm ownership and making a day trip out to the local gun range…unless they’ve been specifically banned from firearm transport or possession.

As far as specific bans, in most cases it is all up to the state. As we’ve discussed in nearly every article pertaining to convicts and their rights, states–and even counties–can and often do have authority to implement tighter restrictions in such matters. So when in doubt, check your local county website or call up the law enforcement desk and just ask the question.

If the state gives the go-ahead for rights restoration, then we must head back to the federal arena. Why? Because federal statute demands that a felon should first have their rights to vote, hold public office, and serve on a jury restored. If those are restored, then they’ll consider granting additional rights restoration (i.e. firearm ownership).

Antique black powder guns, including pistols and rifles are not federally prohibited from being owned and shot by a convicted felon. Some states and local government laws may prohibit you from owning an antique firearm though. It is important to do your research and talk to an attorney before you purchase any type of firearm, black powder or not. You can find more information about felons owning black powder guns here in regards to FEDERAL LAW ONLY.

Okay, now let’s zoom in on that phrase “possession or transportation of firearms.”

Wow, those lawyers have a way with writing long sentences. But here’s are the consequences of not following the law, and it is a little more concise and to the point: “Any person who violates this section shall be guilty of a Class 6 felony.”

“However, any person who violates this section by knowingly and intentionally possessing or transporting any firearm and who was previously convicted of a violent felony as defined shall be sentenced to a mandatory minimum term of imprisonment of five years.”

“Any person who violates this section by knowingly and intentionally possessing or transporting any firearm and who was previously convicted of any other felony within the prior 10 years shall be sentenced to a mandatory minimum term of imprisonment of two years. The mandatory minimum terms of imprisonment prescribed for violations of this section shall be served consecutively with any other sentence.”

Okay, you get the gist! Felony convict = no guns! ‘Nuff said…

At the Shooting Range

So back to that gun range… Well, the staff at the range aren’t going to be running a background check on you, at least none do that we found in our research. What this means is, a convict might literally be able to walk into a range and play with guns…but if they are caught, the blame is on them. It’s up to the convict to understand the above laws and penalties regarding use of firearms. As they say, ignorance of the law is not an excuse!

Meanwhile, now that you know that law… anyone thinking they can simply rely on their own good judgement, who thinks it is not a “big deal” to go get in some target practice in a monitored range is making a mistake. If you knowingly break the law, you’re playing with fire and risking another conviction. Is it worth it? What do you think?

So, can a felon go to a firing range? They probably shouldn’t try to. As with hunting with friends, if a felon puts themselves in a situation where they are able to physically pick up and fire a handgun or rifle, then are clearly at risk of breaking the Federal Firearms Act, which prohibits a felon from being near weapons which they could take control of. It doesn’t matter if the convict has an intention or desire to do such a thing, only whether or not they could. And if they ever did happen to pick up a gun, WHAM–now they are officially a “felon-in-possession.”

No, the firing range staff may not be there to run a background check, but anyone entering the range does have to complete a waiver form and on that form it should ask you about your criminal past. If you misrepresent the truth (i.e. lie) on the form, and you do not tell about your felony history/conviction, then guess what? If the staff finds it suspicious, there’s nothing stopping those staff members from getting on the phone and asking the police to swing by for a little surprise visit.

After all, it may not be the staff’s legal duty to stop you, but in general there is no business that wants to let felons onto their establishment to knowingly break the law. And besides, don’t you think those gun range workers are fairly adept at spotting criminals? Of course they are! Sometimes it’s the prison tattoos that give it away, or maybe it’s just a general vibe, but every week–maybe every day–firing range personnel deal with the same issue. So don’t try to fool them or lie on the paperwork. Again–not worth another conviction.

If you ignore the above good advice and try to sneak into a shooting range anyhow, and if you do lie on your forms and you do make it past the eagle-eyed range staff, just remember–law enforcement agents of all types love firearms and firing ranges, too.

Yes, that’s right! For all you know, the range is going to be full of off-duty police officers…maybe even a parole officer or two. If any of them recognize the felon in question, or maybe overhear some snippet of dialogue about the felon’s past, then it won’t take long for someone to come over for a chat…and maybe an arrest, since at that point the convict will literally be in the act of breaking the law. So please keep all of these things in mind if you or someone you know who has a felony conviction wants to hop in the truck and drive out to the range for a couple hours of stress relief. If won’t be very stress relieving if the day ends with a free trip to prison.

We hope this article cleared up the question of “can a felon go to the shooting range?” It’s not a great idea. Same with hunting, so if you haven’t, check out our article about can a felon go hunting? Many felons enjoy hobbies which involve firearms, but the case is that they need to find other hobbies. One alternative to firing a gun is taking up a bow or crossbow!